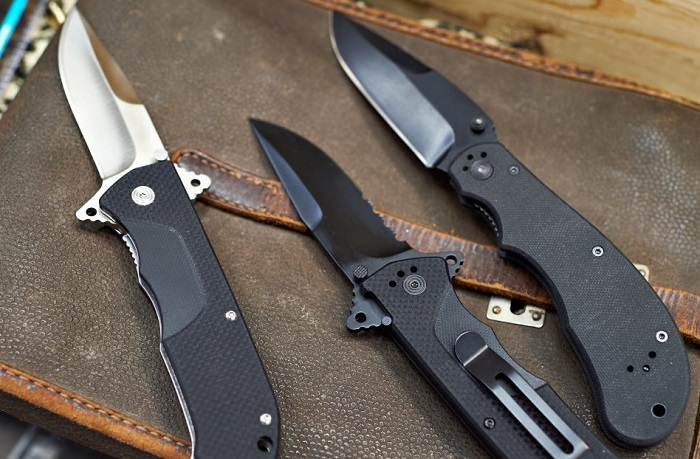 For preppers, survivalists, and anybody else with concerns about the future, self-defense is a very important issue. Whether social structures crack under pressure from natural disasters, military threats or a simple scarcity of resources, many outcomes will remain the same. Hostility, aggression and lawless behavior, even among neighbors and friends, is likely to cause big problems when times get tough.

So, the question is, how should you protect yourself and your family? The topic of defense, though essential for preparedness in a survival situation, is also a rather thorny subject. It can be tricky for preppers to gather self-defense supplies, for example, because state laws forbid the possession of most weapons even if they’re not in use.

The issue is, Can you get in trouble for carrying a pocket knife? The short answer is yes you can definitely get in trouble for carrying a pocket knife outside of your home, regardless of why you have it in your possession. State laws do vary, however, so it’s worth taking a closer look at the rules for your particular city or area. Generally speaking, pocket knives are prohibited in public locations and you can get arrested for carrying one.  So in states where you can, is it a reasonable weapon to carry for self-defense?

The Legality of Carrying Pocket Knives

Again, some states allow pocket knives if they’re under a certain length, but you must check before you decide to carry one. You should also think carefully about why you feel the need to carry a weapon and whether it is likely to keep you safe or put you in more danger.

Don’t forget, even if your state permits the carrying of certain types of pocket knives, this doesn’t mean you can keep one on your person while in a different state. Always check local laws before taking a knife out of your home.

It stands to reason that very busy, heavily secured locations like tourist attractions are extremely risky places to carry any kind of weapon. If you attempt to get into a secure building and a knife is found on your person, you may be arrested on the spot. Some no go areas include schools, museums, federal buildings, airports, and government buildings. It doesn’t matter why you’re carrying, you’ll still get in a lot of trouble.

It should be noted different countries have different laws on carrying bladed weapons. To be honest, it’s not worth trying to take a knife through an airport anyway. However, if you do manage to get it onto the plane – likely in the hold – make sure you’re not breaking any laws by carrying it in your destination country.

For instance, in England, the possession of knives is taken very seriously. Even the most innocuous types of kitchen knives cannot be bought unless a person can prove they are eighteen years of age. In Germany and many other European nations, locking knives are completely prohibited. They’re considered significantly more deadly than folding knives which push back and closed automatically as a safety feature.

Here in the states where it may not be so restrictive, you might want to consider carrying a multi-tool that has a knife attachment. It should not raise an eyebrow by the authorities in case you are stopped and searched. One highly rated multi-tool pocket knife can be found on Amazon. Click here to get the latest pricing and information.

Why It’s Worth Following the Rules on Carrying Knives

There are lots of legitimate reasons why a prepper, in particular, might wish to carry a knife. Many have genuine, reasonable concerns for their safety in certain environments and possessing a simple weapon helps them feel calm and in control of day to day routines. And it’s not like we’re talking about an AR16 here. The kind of personal defense knives we’re referring to tend to be short and unintimidating. They’re not machetes or carving knives.

Unfortunately, it’s by the by. We live in a society that, flawed or not, prohibits the carrying of bladed weapons. So, in our opinion, it’s not worth the risk of carrying one. We advise preppers and survivalists to collect self-defense weapons if they feel it’s necessary but to keep them stored safely at home. There is rarely, if ever, a good enough reason to carry a knife. When society crumbles, as it many expect it to, the playing field may have to change. For now, we strongly advise against the carrying of pocket knives outside the home unless for a specific and demonstrable purpose, such as DIY.

Currently, some of the states where you CAN carry a pocket knife are Kentucky, Arizona, Oregon, and Idaho. You won’t get arrested just for being in possession of a knife in any of these regions. Nevertheless, it’s still worth thinking carefully about your reasons for doing so and the likelihood it’ll get you in trouble anyway. If, for any reason, you are stopped by the police while carrying a knife, state that you are carrying a bladed weapon right away.

Do not reach for it. Do not touch it. Keep your arms away from your sides. The last thing you want is to be shot because a police officer misinterprets your movements as aggressive or dangerous actions.

How Much Trouble Can You Get in for Carrying a Pocket Knife?

As each state has its own laws on the possession of pocket knives, the punishments for breaking them naturally vary as well. They also (or should) consider the specific circumstances of each breach. For example, a person found with a small knife tucked away in their coat or shirt should get lighter punishment than somebody found with one in their hand.

Although, as we well know, the punishment doesn’t always fit the crime. To reiterate, the best way to keep yourself safe and out of trouble is, simply, not to carry weapons outside your home. Don’t give an unjust system the opportunity to flex its muscles at your expense.

The punishments for illegal possession of a pocket knife range from a formal warning to a custodial sentence. Verbal and written warnings come with no additional consequences. If this your punishment, you’ve been very fortunate and should accept it gracefully. Leave the situation immediately. Don’t push your luck because police officers can escalate from written warning to criminal charge very quickly.

In almost all cases, you’ll have the offending weapon confiscated. Yes, it’s frustrating, particularly if the pocket knife was expensive to buy or given as a special gift. Unfortunately, there’s not much you can do about it. If you argue, you risk further punishment. Again, the best course of action is to comply and leave the situation as calmly as possible.

In the event of an arrest, there may be a citation. This requires the offender to pay a small fine and, in most cases, turn up for an appointment in court. While it’s a more serious punishment than a formal warning, it is still a low-level action. An arrest may also result in a criminal charge and a court case which is the most serious of responses.

Depending on the nature of the offense, there’s a good chance you won’t be sentenced to a jail term, but it is always a possibility. People can and do serve jail sentences for illegal possession of pocket knives. To be honest, if you’ve ended up in a serious situation like this, you’ve probably made some unwise decisions. If you manage to avoid prison time, we strongly advise rethinking the way you handle, store and collect self-defense weapons.

There are fair and legitimate questions to be asked about our country’s laws on self-defense weapons. They’re not always fair and, often, they punish people who have no intention of doing anything other than keeping their families safe. Carrying a pocket knife doesn’t make you a dangerous person.

However, it can end up putting you more at risk than if you weren’t carrying one. It’s worth remembering this if you struggle with the idea that carrying knives isn’t permitted in your town or city. It’s up to you to decide whether the risk of going to prison is worth the risk of, potentially, not having a knife in a situation that causes you to feel threatened.

One can take the chance and look at a multi-tool that always seem to have a knife compartment. It is difficult to see it as a threatening weapon. Swiss knives are very popular that have many attachments. One that I highly recommend can be purchased on Amazon. Click here to get the latest pricing.